Last week during the night when the full moon and eclipse merged, we sat with some friends around a fire. In the flow between fire and moon, we connected ourselves to send healing and light into the world.

In a moon eclipse, the moon and her feminine energy are hiding in the dark. The past week it felt as if the dark was strongly present and with it the invitation to embrace our shadowy sides. Again (pff) to re-member that we may be aware of dark energies that require attention, that require to be seen and may flow to the light.

During the week of the Hieros Gamos festival (first week June, Men-Women festival in Holland www.hierosgamosfestival.nl) we were told that the fire had to be extinguished because of the drought, a national ban. Sacred Fire, for the women connected with Grandmother Fire, for the men with Grandfather Fire. In the morning we enjoyed the burning sweatlodge fire to sink together with 55 women in the deep bed of the temazcal, the soft loving energy of it was palpable on the entire women’s field. In the afternoon Patricia and Helena accompanied the entire women’s field in a healing ritual on the ancestral male line. Fire and Water did their transformative work, we even moved the Sacred Space for an afternoon to support the women closer together.

That same evening we stood around the Sacred Space with almost all the women to sing in front of the extinguishing fire. It hurt to extinguish her, although she continued to live in the form of burning candles throughout the festival. It’s like a forest with Elffire, Jetske said…

Rationally I could place what was happening, and all the words that started to live around it, that earth and water needed more space, etc… were perfectly understandable from the mind. But not from the Heart. As the female fire guardian of the festival, it felt as if a very deep wound was torn open (I can still feel it when I re-inner that moment). That night I didn’t feel the essence of what was happening. Suddenly it went so fast after a whatsapp of state forest management … only doubt, uncertainty and an enormous vulnerability.

Barely slept that night, the morning made room in the central Temple – built with so much dedication by our Temple Guardians – to truly feel what wanted to move within me, what the message was when the fire went out. Tears of ancient sorrow, a society that does not understand that a Sacred Fire would never just start a huge fire, it came in as rigid hierarchical patriarchal energy with an irrevocable message.

Earth and Water were given more space. The Sacred Space became an even deeper bed, an embedded womb, for the women. And at the same time in me the feeling that the fire, that after centuries of separation, had found its way back to the women like a truly healing grandmother’s fire, was taken away from us again. A painful penetration, an old memory of the Roman Catholic Church in a female society. I was reminded of one of my bibles: and the drummers were women (Layne Redmond) … A book that I read years ago while travelling and was so touched by the drastic way in which the church entered matriarchal societies and disproved centuries of female development.

An angel from the women’s field literally and figuratively brought me healing. The subsequent sharing among the female core team brought support and clarity. Thanks Caroline, thanks Sisters.

After that I felt reborn. The fire inside me could continue to burn and inspire the festival with sparkling and lively energy. New rituals were created. A wonderful playful joy with Agnes, water guardian of the female sacred space and soul sister.

During the farewell ritual at the end of the festival, the male fire returned a loving bed to the female fire. My gratitude for this space is great. It felt just like the healing gesture in which the male spiral received all women with love during the merging ritual. Indescribable unconditional, beautiful, powerful, soft, connecting. To feel wisdom in the deeper layers of all male eyes. So healing for something far greater than ourselves, far greater than for all the men and women of this festival, reaching out to society, to all our loved ones and relatives, to many realities …

Be vulnerable. Hieros Gamos festival was again an intense exercise in being true. That is also where vulnerability belongs. To fully realize that what we experience collectively, does not just pass through us with the words – ‘this is something collective’ and thus pass the wound away from yourself – or that something can only pass through us because it is also our personal wound, shadow and mirror.

For me this is a valuable lesson that only now, two weeks after the festival, really starts to get through. What a strength a festival has! when our primal wounds are exposed and we have no choice but to be with them, to look at them, to feel them and – no, not to run away from them – to give them a place. To embrace our deepest wounds, to embrace them, from the heart. To not get stuck in the victimhood of it. Thát is a true choice.

Early this morning I was sitting in silence here in our Temple in Portugal. Outside there was a veil of dense mist over the valley, shrouded in a deep silence. Feeling that I am triggered by my deepest wounds. How do I deal with that? What can I learn from it now, July 2019? How can someone who is so damaged inside, through lives, through this life, through trauma, through mother and father wounds, through collective pain, as was so tangible from the sacred fire at the HG festival, yet live in joy, still choose the light?

With all the wounds, without pushing them away, being with them, acknowledging them and giving them space/a place. Placing anchors and filters to make choices so that you can live less with the wounds and more with and in joy, love and light. Fully realize that as an adult woman you can make a choice, with the full awareness that I will always carry my wounds with me, but that I am not them, although I do carry the vulnerability of them in my daily life. However, I am not them… It is what my soul has chosen to grow on earth in who I truly am.

Our Cheiron: our deepest wound is our greatest strength, which is true when it comes from the inside, is cherished from the inside, and is not just a picture to the outside world. To be a channel in and through all wounds, for myself, for others, for the universe, for healing on a much larger scale.

If I choose for the wounds that I carry with me, the vulnerability that I carry with me, to block my energy, then everything in and around me will stagnate. If I choose to sit in silence, let the energy flow from earth to cosmos and back again, and be in it, then I can feel the magic of it, how everything in and around me becomes fluid and heals. Filled with compassion, integrity, respect, flow. This requires courage and dedication.

I accept the challenge, I heard myself say from the depths of my heart. In the meantime the sun broke through the veil to face the day. With a smile I stretched out and stepped into the day…. Giving myself life and sending that vibration into the world. 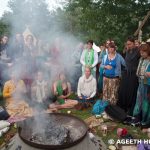